With people tired of lockdowns, a targeted approach that prioritizes protecting the most vulnerable may be America's only path forward.
My Turn
'I'm a Cruise Ship Singer—This Is What It's Like Behind The Scenes'

"We're going to meet this challenge of voter suppression by coming together and personally contacting over 2 million Texas voters," O'Rourke said.
U.S.
Brian Laundrie's Notebook Reveals Who is Responsible for Gabby Petito

Brian Laundrie's Notebook Reveals Who is Responsible for Gabby Petito

Naveed talks with Fred Guttenberg, author of Find the Helpers: What 9/11 and Parkland Taught Me About Recovery, Purpose, and Hope.
SPONSORED INSIGHT
Thailand: Leading the Way in Sustainability

Thailand: Leading the Way in Sustainability

The Thai economy could surge by 5-6% in 2022, according to official estimates, as the Asian tiger economy puts the worst of the covid-19 pandemic behind it and benefits from strong long-term policymaking that emphasizes sustainability and circularity.
Awards
2021 Autos Awards

Newsweek has partnered with Parent Tested Parent Approved to recognize companies and products made with families in mind.
Top Story
News
Germany Breaks With NATO Allies to Rebuff Ukraine's Pleas for Weapons

Biden 'Open' to Summit With Putin, Zelenskiy as Russia Agrees to More Talks

The wildfire started in the Palo Colorado Canyon had grown to around 250 acres by early Saturday morning.
As White House Frets About Roe v. Wade, March for Life Feels Time Has Come

President Biden's approval rating has been in negative territory since August and shows little sign of improving.
At Least 11 Iraqi Soldiers Killed in IS Attack While They Were Sleeping

"We affirm that the blood of the heroic martyrs will not be in vain and that the response by our heroic army units will be very harsh," the Iraqi military said.
Trump Lawyer Downplays 'Incredibly Subjective' Asset Valuations Amid Probe

While Biden has said he plans to seek another White House term, Trump has not confirmed that he'll enter the race.
Calls for US to Stop Arming Saudis Following Deadly Airstrikes in Yemen

"America is complicit in ... this horrific war that Biden and his senior officials once promised to end," one national security reporter wrote. "I hope they see these children when they sleep at night."
Jim Jordan Already Planning Biden Admin Investigations if GOP Takes Power

Most analysts believe Republicans are well-positioned to take back control of the House in the midterms.
Fewer Than 1 in 6 Americans Want U.S. Soldiers in Ukraine-Russia War: Poll

Newsweek has partnered with Statista for our third annual list of America's Most Responsible Companies. This year we have expanded our list to include 500 of the largest public corporations.
Rankings
America's Favorite Restaurant Chains 2022

Newsweek and Statista are proud to award 220 winners in 16 categories. The awards are based on the results of a survey of more than 4,000 customers and employees in the U.S.
Rankings
America's Best Online Learning Schools 2022

Newsweek partnered with BrandSpark, a leading market research firm, to create this list. Thousands of shoppers participated in this edition and 83 service and E-commerce categories were included.
IN THE MAGAZINE
2022/02/04
February 04 ISSUE
See All Features
The Forever Virus: What Science Says About the Future of COVID
Cover Health

The Forever Virus: What Science Says About the Future of COVID

For Christian Prophets Who Predicted a Trump Reinstatement, No Apologies
Features Religion

For Christian Prophets Who Predicted a Trump Reinstatement, No Apologies

China's Using Economic Coercion as Blackmail. The US and EU Must Fight Back
Periscope Culture

China's Using Economic Coercion as Blackmail. The US and EU Must Fight Back

Intangible Cultural Heritage Traditions to Celebrate Around the Globe

22 Books to Look Forward to in 2022
Downtime Culture

The protesters marched to the Supreme Court, with many of them young people and students bussed in by schools and church groups.
Vladimir Putin
Biden 'Open' to Summit With Putin, Zelenskiy as Russia Agrees to More Talks

Biden 'Open' to Summit With Putin, Zelenskiy as Russia Agrees to More Talks

"We are overjoyed to confirm that we have welcomed a baby via surrogate," Jonas and Chopra wrote in a message posted to Instagram on Friday.
Border
Alleged Border Census Undercounting May See Texas Lose $247M in Medicaid

With a number of recent studies assessing the effectiveness of cannabis-sourced compounds in fighting the virus, Newsweek decided to weed out the myths.
Hospitals
Almost a Quarter of U.S. Hospitals Have Staff Shortages, Forcing Delays

Author John Nichols blasted Former President Donald Trump's handling of the pandemic, claiming his denial caused hundreds of thousands of needless deaths.
Exercise
Experts Discuss Whether There Is Such a Thing As Too Much Exercise

Exercise is an important aspect of healthy living, but is there such a thing as overdoing it?
U.S.
MSNBC Host Confronts Peter Navarro Over 'Peaceful People' Claim About 1/6

Tech & Science
What We Know About Omicron BA.2 Variant Under Investigation in U.K.

What We Know About Omicron BA.2 Variant Under Investigation in U.K.

Robert Harris and Christian Schwochow on 'Munich—The Edge of War'

​​How to Create Shared Experiences With Current And Prospective Customers

Craving Spring Blooms? Why One Expert Says You May Need to Start Planting N

Craving Spring Blooms? Why One Expert Says You May Need to Start Planting N 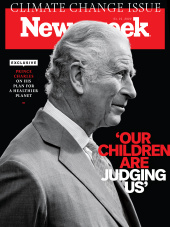 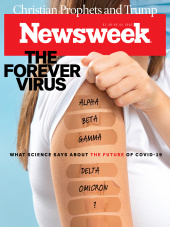