FEATURED STORIES
U.S.
A Guide to Trump Allies Who've Pleaded Guilty or Been Convicted of Crimes

The largest nuclear power plant in Europe was the topic of a Friday talk between Emmanuel Macron and Vladimir Putin.
Politics
Two Senate Victories That Will Help Democrats Protect Abortion: Warren

Democrats Look for Midterm Rebound After String of Legislative Victories

"It is harder for Republicans to say now that the Biden administration has not accomplished anything," a political analyst told Newsweek.
Autos
The End of the Gas-powered Ford Mustang Is Almost Here

The End of the Gas-powered Ford Mustang Is Almost Here

The women divided driving duties this week. Eileen test drove 20+ cars in Detroit while Nicole drove a G-Wagen for the first time (and learned about which in-car pillows are best). Nicole is also fresh off a trip to the White Mountains in one of the largest vehicles on the market today.
Sponsored
Brand Loyalty Revolution

How technology is changing the customer relationship game. Brought to you by Oracle Advertising and Customer Experience.
Podcasts
Free Lunch, Scamilton, and Russian Metalheads

Andrew Tallman brings you the latests from across newsweek.com
Top Story
Culture
Elon Musk Attends GOP Retreat After Announcing Support for Both Parties

The Tesla CEO is facing criticism for attending an event hosted by House Minority Leader Kevin McCarthy on the same day he claimed to be a political centrist.
MORE STORIES
More Republicans Have 'Very Favorable' View of Trump After FBI Raid: Poll

The number of Republicans who say they are more enthusiastic about voting in this year's midterm elections has also increased.
Salman Rushdie's Alleged Attacker Reveals Reason for Stabbing Him

"I went 'bang' with my stick. And it was like 'bang.' And it [a Russian Su-34 jet] fell," Valeriy Fedorovych said.
Putin Replaces Navy Chief Igor Osipov After Moskva Flagship Sunk

Russia has failed to exert control over the Black Sea since the beginning of the invasion of Ukraine.
Deep Sea Divers Hunt Down U.S. Navy Warship Wreck From 100 Years Ago

The USS Jacob Jones was the first American destroyer to be sunk by enemy action.
Climate Change Threatens Sea of Galilee as Israelis Attempt to Save Waters

Israel removes salt from seawater to replenish the lake's levels, but the process uses fossil fuels and creates a negative feedback loop with global warming.
Asteroid Bigger than Pyramid Set for Closest Approach to Earth for Century

An asteroid up to 750 feet in diameter is due to pass near to Earth on Saturday.
Democrat Mandela Barnes Defeats Ron Johnson in Wisconsin: Fox News Poll

Is America Worth Fighting For? (Feat. James Golden a.k.a Bo Snerdley)

Long-time Rush Limbaugh producer and host of Bo Snerdley's "Rush Hour" on 77WABC New York, James Golden stops by to reflect on Rush's enormous legacy and the importance of remaining optimistic in an increasingly polarized America.
SPONSORED INSIGHT
Indonesia: A new path to the future

Indonesia: A new path to the future

The ‘Made in Japan’ brand has long been synonymous with high quality. And behind the superior Japanese quality that Nippon manufacturers offer is the Monozukuri philosophy, which focuses on craftsmanship, attention to detail and the constant pursuit of innovation to meet client, market and societal demands.
Rankings
America's Best Addiction Treatment Centers 2022

Newsweek has partnered for the third consecutive year with global market research Statista to rank the best U.S. treatment facilities focused on addiction.
In The Magazine
2022/08/26
August 26 ISSUE
See All Features
Democrats Edging Out Republicans for Midterms in 'Generic Ballot' Polling
Cover Politics

Democrats Edging Out Republicans for Midterms in 'Generic Ballot' Polling

What'll It Take to Elect a Woman Pres? Picturing One in the Oval Office
Periscope Politics

From a 5000-Egg Omelette to Chocolate Dresses, the Best in Food Festivals
Downtime Culture

From a 5000-Egg Omelette to Chocolate Dresses, the Best in Food Festivals

Inside the U.S. and China’s High-stakes Race for Israeli Technology

The U.S. and China are in a high-stakes race for Israeli technology. Israeli hi-tech entrepreneurs want to do business with China, but America wants to draw the line by telling Israeli companies, "if they want American investors they cannot have Chinese ones."
03:53
EDITOR'S PICK
Midterm elections
Democrats Look for Midterm Rebound After String of Legislative Victories

Democrats Look for Midterm Rebound After String of Legislative Victories

"It is harder for Republicans to say now that the Biden administration has not accomplished anything," a political analyst told Newsweek.
Russia-Ukraine War
Expect 'False Flag' Attack at Zaporizhzhia Today—Both Russia, Ukraine Warn

Fox News host Laura Ingraham recently suggested that Trump supporters could think "it's time to turn the page" on the former president.
Russia-Ukraine War
Ukraine in 'Condition-setting Phase of Counteroffensive' in Kherson

Ukraine in 'Condition-setting Phase of Counteroffensive' in Kherson

"Ukrainian maneuvers would likely try to encircle the city to eliminate the possibility of those Russian forces in the city leaving," a military expert said.
Florida
Inside DeSantis 'Anti-Woke' Law Partially Blocked by Judge

Judge Mark Walker said the so-called "Stop WOKE Act" was "upside down" when it came to the First Amendment.
Idris Elba
Idris Elba is Everywhere with 'Beast' and 'Three Thousand Years of Longing'

"It's a survival film with an African American family. Culturally, I felt like something that we hadn't seen before," Idris Elba told Newsweek's Parting Shot about his new film 'Beast.'
Bill Nye
Bill Nye's Vision of America in 100 Years

Bill Nye spoke to Newsweek about the potential disasters set to strike the USA, and what humankind can do about it.
Joe Biden
Biden's Visit 'Emboldened' Saudi Arabia to Crack Down on Dissent—Activists

Biden's Visit 'Emboldened' Saudi Arabia to Crack Down on Dissent—Activists

World
Biden Right About Putin Not Having a Soul: Biographer

Biden Right About Putin Not Having a Soul: Biographer

Crimea Explosions Knocked Out Over Half of Russian Black Sea Jets: Report

Crimea Explosions Knocked Out Over Half of Russian Black Sea Jets: Report

This Awesome Image of the Sun Will Blow Your Mind

14 Tips for Surviving the Endless Grind of Creating Content

The CFPB's Advisory Opinion Process Should Be More Inclusive

The CFPB's Advisory Opinion Process Should Be More Inclusive 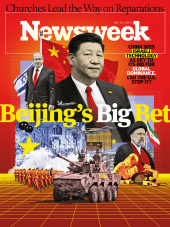 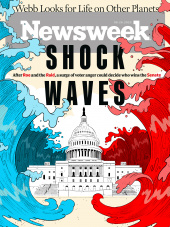