Senate Democrats are expected to block a GOP measure for $250 billion more for small businesses and instead offer a broader proposal of their own. How lawmakers will overcome the impasse remains to be seen.
World

The Chinese embassy in Moscow on Wednesday night announced the temporary closure of all land border points of entry for individuals travelling between the mainland and Russia.
World

COVID-19 in Age Of Protest: How the Pandemic Could Change How We Organize

Bernie Sanders Dropped Out—So Is Medicare For All Dead?

Democratic voters across the country largely rejected the candidates pushing for universal health care in the primary race.
SPONSORED INSIGHT

COVID-19 is not our only enemy. While the world confronts a pandemic, our critical infrastructure is vulnerable to cyberattack. Read this new report on where the weak points are and how to strengthen defenses against terrorists and cyber-criminals.
SPONSORED INSIGHT

With the U.S.A. announcing it will print a seemingly unlimited supply of dollars to offset the effects of the COVID-19, cryptocurrencies have a unique opportunity to position themselves as a reliable store of value.
SPONSORED INSIGHT

Who Leads the Field in Dependency Treatment in 2020?

When seeking guidance on beating an addiction, there are many things to consider. Where do you go to ensure that you will not just turn the corner, but keep carrying on down the right road for the rest of your life? Find out more.
Top Story
News

The Australian Health Protection Principal Committee said experimental use of medications such as hydroxychloroquine for coronavirus prevention and treatment was not recommended.

Hydroxychloroquine and its analog chloroquine has been used experimentally on coronavirus patients as there is currently no specific drug or vaccine against the disease.
MORE STORIES

Up to 150 Saudi Royals Infected With Coronavirus: Report

There have now been 2,932 confirmed COVID-19 coronavirus cases in the kingdom, with 41 deaths and 631 recoveries.

The Attorney General told Fox News anchor Laura Ingraham that the debate about the malaria drug has been politicized.

1 in 5 texters who have contacted Crisis Help Line have expressed anxiety about the COVID-19 outbreak.

Senators have reportedly been advised to use alternative video conferencing platforms or apps for remote working during the lockdown.

Individual has been isolated and will be transferred off the ship as soon as possible.

Russia and OPEC representatives will meet Thursday following reports that a deal to end the price war is near.

The damage was severe in several parts of Indiana, where trees and utility poles were downed during the storms.

Roughly 74 percent of respondents said they approved of their state governor's response to the coronavirus pandemic.

U.S. Coronavirus Cases Pass 400,000 After Doubling in Just One Week

At least nine states have reported more than 10,000 confirmed cases, including in New York, the worst-hit state in the country.

Joe Biden vs Donald Trump: What the Latest Polls Are Saying

WHO Director Thanks World Leaders for Support After Trump Funding Threat

Trump accused the WHO of being too "China centric" on Tuesday, and suggested the organization had mishandled the COVID-19 outbreak.
Heroes of the Pandemic
Pandemic Heroes
Restauranteur Delivers Oranges to Hospital Workers Amid Coronavirus Crisis
"We all have to help each other," Matthew Fermin, owner of East Harlem restaurant Santiago's Beer Garden, told Newsweek.
Pandemic Heroes
Teenagers Shop for the Vulnerable During Coronavirus Emergency
"I almost cried," said a user of Six Feet Supplies, a charity started by teenagers who shop for those susceptible to COVID-19.
Pandemic Heroes
Philly DJ Rallies Friends, Strangers to Feed Nurses and Support Businesses
"I want to keep it going as long as we can," Ryan O'Connell told Newsweek.
Culture & Travel
Travel
What the World's Chefs Are Cooking Up at Home During the Pandemic
Find out what this international coterie of chefs and food writers—from Tbilisi, Georgia, to Rome to New York City—are cooking up while stuck at home, and get their tips for stocking your kitchens and pantries for optimum deliciousness.
Travel
Take a Virtual Vacation With These Travel-Inspiring Films
For now, from the safety of your couch, you can still explore the world with these wanderlust-inspiring films. From 'The Beach' to 'Into the Wild,' these movies have the power to take you away from reality for a few hours and let you dream of a post-pandemic adventure.
Travel
I'm Locked Down in Italy Playing Music—But I'm More Worried About America
Two American musicians play a nightly concert on their balcony while quarantined in their newly adopted home in Italy. It's a gift for their neighbors, but they also have a strong message for Americans, too.
OPINION
The debate
Biden's Running Mate Needs to Win Him an Entire State, Not Just a Constituency
By Peter Roff
VS
A Woman of Color VP Is More Than a Consolation Prize. It's a Necessity
By Aimee Allison
LATEST NEWS
SPONSORED INSIGHT

How Can a Good Business Education Benefit You?

Enrolling at a good Business School might be the best investment you can make in your future, and while costs can be significant, the rewards are incalculable. Find out more.
Sign up for our Newsletter
Sign up
Update your preferences »
SPONSORED INSIGHT

What Can A Private Education Do For Your Child?

What is the single most consequential choice you make to give your child the best possible advantage in life? If you think it’s education, read on.

What Is Your Accounting And Finance Team Missing?

Have you ever wanted more from your accounting and finance professionals? These three letters can help.
IN THE MAGAZINE
April 10 ISSUE
See All Features
Cover Business

The Coronavirus Will Change How We Work Forever

As Jobless Claims Surge, Here Are 7 Things To Do If You Lose Your Job

Exclusive: Inside the Military's Secret Plans If Coronavirus Cripples D.C.

Take a Virtual Vacation With These Travel-Inspiring Films

Norman Reedus on 10 Years of 'The Walking Dead'

"We want to deploy our resources and competences to contribute to the fight against the COVID-19 pandemic," CERN Director-General Fabiola Gianotti said.
Health

Is Eye Pain a Symptom of Coronavirus? Google Searches for 'My Eyes Hurt' up

Former Google analyst says his research provides "suggestive evidence that eye pain can be a symptom of the disease."
News

Kate Middleton joked Prince William has already eaten the Easter chocolate as they attempted to lift morale in a school for children with parents on the coronavirus frontline.
News

Where to Find Financial Help Before Stimulus Checks Deposit

Here is a list of community, nonprofit, and government initiatives available to people in need during the pandemic.
Health

Is It Selfish to Go Outside? Ethical Dilemmas During the Covid-19 Pandemic

The new coronavirus has infected more than 1.3 million people according to Johns Hopkins University.
News

The tri-state area of New York, New Jersey, and Connecticut, saw a combined total of nearly 7,000 deaths among its nearly 191,000 infected people.
News

Iranians reportedly remain concerned over the country's lack of equipment and other resources to fight the pandemic.
FEATURED SLIDESHOWS
11

Relive the 'Star Wars' Saga at These Filming Locations

Active Volcanoes Around the World That Could Erupt at Any Moment

Inside the Last Bohemian Apartments of the Storied Hotel Chelsea

Grocery Stores Are Avoiding Sales and Discounts During Coronavirus Pandemic

Trump Says He May Use Tariffs on Oil Imports to Protect U.S. Energy Jobs 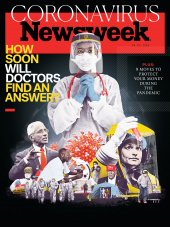 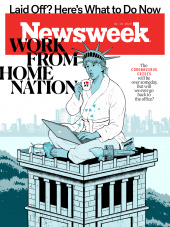